You are here:
Fed CupNational Teams 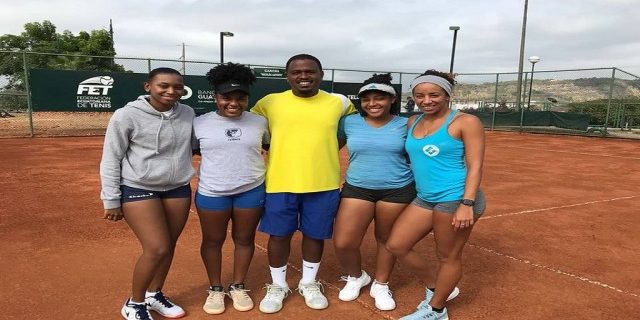 The road to success is fraught with many obstacles.

After going undefeated in Pool B and emerging as winners, our Bahamian Fed Cup’s road to promotion had one more challenge to overcome: the winner of Pool A, Ecuador.

This opponent would prove to be the biggest resistance yet and for multiple reasons. Ecuador was ranked #1 in the tournament with two players ranked on the WTA circuit – No. 844 and No.1102 (Singles). In addition, they would be playing at home with all the advantages (acclimation to altitude etc.) and encouragement that playing at home affords.  Undaunted, The Bahamas Fed Cup Team recognized they did not emerge as the Pool B winner without some exceptional talent. Boasting a player ranked No.922 in the WTA, along with some premier collegiate tennis athletes was nothing to be scoffed at.

The Bahamas accepted the challenge head-on. Up first was Danielle Thompson who played well during the entire tournament racking up 2 singles wins. Danielle played Camilia Romero of Ecuador. Despite Danielle’s efforts, she would not be able to silence Romero who won 6-3,6-3. Reminiscing on the recent comeback victory over Trinidad in this competition, Kerrie Cartwright was cognizant of what the Team was up against; a singles win was needed to force a doubles tie-break. However, Cartwright was not able to obtain a win and lost in two sets 6-3, 6-3 to Charlotte Roemer. Kerrie had not lost a match prior to this and played a stellar game throughout the tournament.  Simone Pratt who was instrumental and effective in doubles play and who teamed up for two wins for Team Bahamas along with the youngest member of the team, Sierra Donaldson,  who was able to add a doubles win into her Fed Cup column, cheered on the team all the way.

The strategic decisions and masterly coaching of the team is credited to Mr. Marvin Rolle.  Coach Rolle directed Team Bahamas in tournament play, which led to an opportunity the country had not had since its successful promotional bid in 2013. After the game Coach Rolle spoke highly of Team Bahamas performance, “Danielle came out with a lot of grit and dedication and left it all out there on the clay.  Kerrie’s match was a great match to watch stunning the home crowd by the tennis exchanges.  It was apparent that the ladies were determined and on a mission. We left it all on the court today and next year we will come back stronger and better!”  He expressed his pleasure in captaining Kerrie, Danielle, Simone and Sierra and lauded the support received from The Bahamas.

The Bahamas Lawn Tennis Association applauds the Team: Kerrie, Danielle, Simone, Sierra and Marvin on its magnificent run to the Promotional Playoff.  The level of play by these ladies proves The Bahamas can compete and win on the international level as this tournament is dubbed ‘The World Cup of Tennis’.  No other event in sports boasts greater participation of countries for women’s team competition. The potential and possibilities are great and have been reaffirmed by the skills and performance displayed. We enjoyed the journey and know that more growth and successes are on the horizon not only in Bahamian team sports but also in Bahamian singles ladies’ tennis in the international arena.

The Team travels to Columbia on July 24th to participate in the CAC Games.

We continue on the road and look forward with great expectancy!