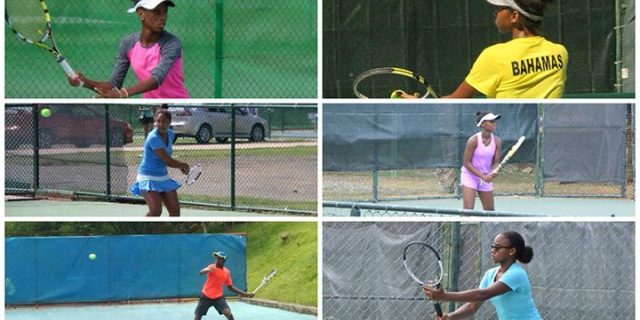 Finals Champion, Semifinal Win and Quarterfinal Appearances and Main Draw Wins were the positive results achieved by a group of The Bahamas top U18 Tennis Juniors who recently participated in the International Tennis Federation (ITF) Tournaments.

The result from this young and talented group is to be applauded as many of them travelled for the first time to these countries to showcase their talent on the international stage.    The Bahamian travelling group consisted of Donte Armbrister, Gabriela Donaldson, Sierra Donaldson, Sydney Clarke, Afrika Smith and Sydni Kerr. The players participated in ITF Tournaments in St. Lucia, St Vincent and the Grenadines and Trinidad and Tobago.

Bahamian Donte Armbrister along with his partner Scott Hackshaw from Trinidad and Tobago won the ITF Doubles Tournament in St. Vincent & the Grenadines.  Donte who is 14 played in the U18 category.  Donte’s efforts earned him his first ITF U18 doubles championship.

The duo of Donte and Scott won all of their matches starting with a first-round win against Browne and Cyrus of St. Vincent 6-0,6-1.  In the Quarterfinals, they faced the 2nd seeded Bicknell brothers of the US and Jamaica and defeated them 6-4,6-4.  In the Semis Donte and Scott advanced after Hayden of Barbados and Kozuki of Japan retired after a 3-0 start. In the finals against Lewis of St Lucia and  Mohammed of Trinidad Armbrister and Hackshaw were victorious.   In singles play, Donte played well 6-3,2-6,2-6 but did not advance past the first round of main draw singles against Pecak of Czechoslovakia

In singles main draw appearance our junior girls had tremendous success.  17-year-old Gabriela Donaldson made it to the quarterfinals in the singles in Trinidad and Tobago with victorious wins over Houllier from Trinidad and 8th seeded Clarke from the United States 6-0,6-1 in both matches. Gabriella played well but lost in the quarterfinals against Fodor of Hungary 1-6,0-6.  16-year-old Sierra Donaldson won her first-round match in Trinidad against Enmet of the United States 3-6,6-3,6-4. In quarterfinals, she lost to 7th seeded Singh of St Vincent.  Sydney Clarke and Afrika Smith made it to the main draw singles but were not able to advance in tournament play in Trinidad.

In doubles play in Trinidad Sierra Donaldson and Afrika Smith advanced to the semifinals doubles play in Trinidad.  The dynamic duo of Sierra and Afrika stormed through their competition.  In first-round play, they won over Amarlia and Gabriela Benn of St. Vincent 6-1,6-2. In the quarterfinals, they won over Clarke of the US and Walle from Curacao 6-3,6-1. This win placed Sierra and Afrika in the girls U18 doubles semifinals! In the semifinals, the duo lost to Blackwood from Jamaica and Fodor from Hungary 2-6,0-6.  In this tournament Sydney Clarke who partnered with Williams of St. Lucia won 6-1,6-2 over Evanson and Koylass. In quarterfinals, they lost to the #1 seeded Drazic from Serbia and Hamlin from the US.

In doubles play in St. Vincent the Bahamian team of Sierra and Afrika beat Humphrey from St  Vincent and King from Trinidad and Tobago 6-4,6-2 advancing to the Quarterfinals again. The duo of Sierra and Afrika then faced the 3rd seed Blackwood of Jamaica and Richter of Guatemala and lost 6-0,6-0. Bahamian Gabriela Donaldson who teamed up with Singh of St Vincent defeated the team of Sydney Clarke from the Bahamas and Williams of St Lucia 6-4,7-5.  This win advanced them to the doubles quarterfinals where Gabriella and Singh lost to the #1 seed of Bornay and Lafrance 2-6,1-6. Bahamian Sydni Kerr teamed up with Joao from France and they played well together but did not come up with the win 6-7(4), 1-6.

Doubles matchplay in St. Lucia saw the team of Afrika Smith and Sierra Donaldson getting pass Davis and Trestrail from Trinidad 6-1,7-5. Gabriela Donaldson from the Bahamas advanced with US doubles partner Boever. Bahamian Sydney Clarke who teamed up with Williams from St Lucia also won first-round doubles 7-5,7-6(4).  Donte teamed up with Ross from the US and won first-round doubles matchplay. Despite their efforts and advancement, they all lost in quarterfinals play.

The Bahamas Lawn Tennis Association recognizes the achievements of these individuals Donte, Sierra, Gabriela, Sydney, Afrika and Sydni in their tennis pursuits.  The young group have produced great results as they position themselves among the best in the best in junior tennis.  Their work has only just begun but this great start will certainly catapult them as they move forward in their tennis journeys.