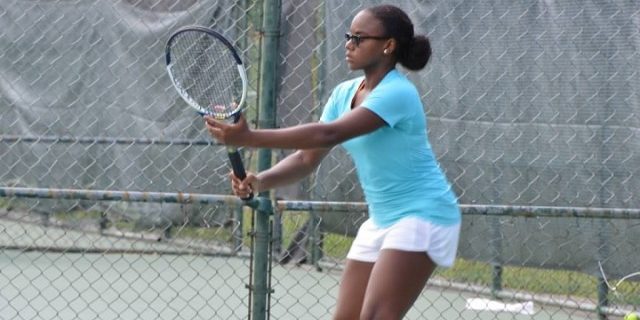 There are a number of young and talented Bahamian tennis players touring the globe this summer.  From St. Lucia in the south to Germany in the North, our tennis players are displaying their talent on the international stage and with their level of play, the world is taking notice.

From the European Circuit

Our promising tennis talent Jacobi Bain is making his presence felt on a Tennis Europe Tour which started in May 2016.  So far Jacobi has played 5 Tennis Europe Tournaments with two events remaining before returning home. This is a great accomplishment for 13-year-old Jacobi. Tennis Europe has some of the best players in the Boys Under 14 category in Europe. Jacobi has held his own in tournament play and has gained a tremendous amount of exposure.

Tennis Europe has players from all over the world and is a great platform to launch a successful tennis career.  Jacobi is scheduled to play in his final two tournaments on his Tennis Europe Tour. One tournament in Ulm, Germany and his last tournament will be the Jugend Cup Renningen in Rutesheim, Germany on August 15, 2016.

From the ITF Circuit

The International Tennis Federation (ITF) Circuit started out with nine events in six countries in 1977. Now it boasts over 400 tournaments in 121 countries in 2015. It is one of the more challenging and contested junior circuits.

A group of talented and standout juniors are competing regionally in International Tennis Federation competitions ranging from Jamaica and St. Lucia to St. Vincent and Trinidad and Tobago. The travelling team of Donte Armbrister, Afrika Smith, Sydney Clarke, Sierra Donaldson, Sydni Kerr and Gabriela Donaldson are displaying their skills in various ITF tournaments in the region. Most recently they competed in the Coca Cola ITF Tournament in St Lucia where they all did well. Gabriela Donaldson made it into the main draw singles and doubles. Sierra Donaldson, Afrika Smith and Sydney Clarke also made it into singles and doubles main draw.  They all won their first-round matches awarding them points to catapult them in the rankings.  Donte Armbrister also advanced in singles and doubles main draw matchplay.

The team moves on to St. Vincent and the Grenadines where they hope to continue to advance in main draw appearances and ITF standings.  The group is coached by Mr. Jim Lavender.

The Bahamas Lawn Tennis Association applauds the vast talent of our young tennis standouts.  They are not only spreading their wings in the Caribbean and the Region but also as far as Europe.  We see great potential in all of them including Gabriela Donaldson, Sydney Clarke, Afrika Smith, Sierra Donaldson, Sydni Kerr, Donte Armbrister and Jacobi Bain.  This summer our youths have sought to gain the necessary exposure and spotlight as their game is constantly improving.   They have sacrificed much to be able to play at this level but we know that after they invest the hard work we will all see the fruits of their labour.

We wish them all well as they continue to put The Bahamas on the map in the world of tennis!